Some Poker glossaries contain every obscure term under the sun, blinding you with Poker geek-speak. We've tried to make our guide a fraction more people friendly. The poker terms here are the language that you will hear used in rooms across the internet and front rooms. Don't be daunted. So long as you know the few basic terms you will be comfortable.

A player is 'all-in' when all his poker chips are in the pot and he has not folded. If any wagers are added after you are all-in, you can not share in those. The bets made after one player is all-in are used to form a side-pot.

When playing in tournaments, no player can 'sit out' a hand as can be done in non-tournament play. When a player must be away-from-table for any reason, they continue to be dealt into each hand, posting blinds when it is their turn and, when there is a pre-flop raise, the away player's hand is folded. The away player's hand is also folded when there is a bet made after the flop.

When a highly favoured player loses a hand to an opponent that is considered to be statistically very unlikely to take the hand –an underdog, in other words that player is said to be 'bad beat'.

When playing pot limit games, this term means that your wager is equal to the current sum contained in the pot. For example, when it is your turn to bet and there is $230 in the pot, if you bet $230 you have 'bet the pot'.

In real poker rooms, the top card of a deck is discarded before any poker cards are dealt. This helps prevent cheating through someone having seen the top card during the cut or through otherwise learning the value of the top card on a deck.

The buy-in is the amount of money required in order to be permitted to play in a poker game. Usually, a buy-in is required in tournament poker and is used to fund the prize pool.

When one player has placed or raised a wager, the 'call' occurs when another player matches that required bet in order to continue play.

This is the action referred to when there is no wager open which must be matched and a player does not wish to place a bet. If there is an open wager, it must be called, raised or the player must fold.

The cards that comprise the 'board', which means those that are placed face up on the poker table and are shared by each player are called 'community cards'. The games to Texas Hold'em and Omaha utilize community poker cards.

If you have sat out of the game for a while and have missed your turn to put up blinds, when you wish to re-enter the game prior to the hand where it would be your obligation to post the big blind bet, you must put up the funds for both blinds. In this situation, the money used to fund the small blind is called a 'dead blind' and can not be used toward calling a bet.

Cards that are dealt face down to a player, also known as hole cards, are referred to as 'down cards'.

Cards that are dealt face down are not visible to other players at the poker table.

These cards are placed on the table face up and can be seem by all players.

when playing Texas Hold'em, this term refers to the set of 3 community cards which are the initial three cards placed on the board and are all dealt at one time.

This term refers to any five poker cards, regardless of value, which are of the same suit.

This action is also known as 'drop' and withdraws the player from further action in the current hand. It is used when a player does not have a strong hand and does not wish to place any additional funds into the pot because they know someone else will beat their hand.

Four of a Kind

A hand that contains four poker cards of one value such as four Queens is called four of a kind and is a top hand.

Poker tournaments where the entry fee, the stakes, or both the entry fee and stakes are waived is called a freeroll. There is not a minimum prize pool such as is seen in some non-freeroll tournaments.

This very strong poker hand consists of three of one kind and a pair.

A 'hand' refers to a single round of shuffling, dealing, and betting. This poker term is also used to refer to those poker cards that a player is dealt in a round.

This poker term refers to a situation where only two players remain in contention for the pot, as in one-on-one.

In this type of poker game, only two players may participate.

This term refers to the card which has the highest value or rank.

A poker variation also called Texas Hold'em, which is one of the most popular poker games. Each player gets two down poker cards and can use three, four, or five of the community cards placed on the board to create the best possible poker hand.

These are the poker cards dealt face down (down cards) in a player's hand.

Any player that is actively playing in a hand and has not folded is 'in'.

This poker term refers to the scenario when a player have four out of the five cards needed to build a straight but the missing card is inside the sequence rather than at the end of the run. If a player holds 4, 5, 6, 8, 9 and they get the 7 to complete the straight, they are said to be 'making the inside straight'.

This poker term refers to the initial pot for a hand. When a player (or more than one player) goes all-in, a side pot must be created for each all-in player which is maintained separate from the main pot.

When used as a noun, this poker term means the pile of folded and/or discarded cards. When spoken as a verb, at showdown time, it refers to returning a losing hand to the dealer facedown, so that other players do not see the cards.

A tournament where each player begins with the same number of poker chips and play is conducted at more than one poker table until, eventually, one player wins all the chips. pay-outs of prizes are based on the number of players entering the tournament and, when playing online, are posted on the tournaments page. These games have a posted start time and require that players register in advance in order to participate.

A betting rule variation in which the only limit to the number of poker chips which can be wagered is the chips the player has on the poker table (NL).

This game allows players to compete for a pot split between the highest and the lowest hands using two down cards and three community cards. A player may use different sets of cards to make up the best high and the best low hands.

This poker term refers to the person designated as the dealer when playing Texas Hold'em and Omaha games.

This is the same as head to head.

This poker term is a hand where the player's best hand is made up of 2 cards of the same value or rank.

Depending on the situation, this term may be used in stead of check or fold.

In Hold'em poker, this poker term refers to using only the community cards to create your best hand.

The is the poker term for two cards dealt face down at the beginning of a hand.

The poker chips available to be won in any given hand.

In this betting variation, each player is limited to wagering not more than the amount which is currently contained in the pot (PL).

The act of increasing the amount bet by a prior bettor.

This poker term refers to the amount of money, in poker chips, taken by the house as a service fee.

This poker term refers to the value of a card. The rank of the 2 of Spades is 2 while the rank of the Queen of Hearts is Queen. Rank value increases from 2 through 10, followed in order by Jack, Queen, King, and Ace. In High/Low games, the Ace may be used both for its high rank and as the lowest rank card.

This poker term refers to the act of purchasing more poker chips during a game but not during a hand that you are playing and applies to real money and tournament play.

The act, considered to be poor poker etiquette, refers to removing poker chips from the poker table and returning immediately with fewer chips.

This is the best possible high poker hand and consists of a straight flush of 10, J, Q, K, A.

This refers to the period after the final bet when all players must show their hands or fold.

This is a pot created when a player goes all-in. The side pot is available to all players not all-in at that point. Infrequently, there can be situations where multiple side pots exist.

A poker table at which you may buy-in to a seat and all the buy-in money goes into the prize pool. The prize pool is then returned to the top finishers per the pay-out table on the tournaments page. A fee is usually required to play at this type of table. Players being with the same number of poker chips and continue to play until one player wins all the poker chips. These table tournaments start once the poker table is filled.

In Hold'em and Omaha, this is the required bet which must be placed by the player to the left of the dealer.

A hand in which the player has five cards in rank order, regardless of suit. For example, 8, 9, 10, Jack, Queen.

A straight comprised of cards that are the same suit.

Any of the four sets, Clubs, Diamonds, Hearts, and Spades, in a deck of poker cards.

A poker variation where players are dealt two poker cards face down followed by five face up community cards.

Three of a kind

A hand containing three poker cards of the same rank such as Q-Q-Q.

This is the cost to enter a tournament. The buy-in money funds the prize pool and is paid out to winning players.

A small fee, much like a service charge, paid to the house by players entering a tournament.

The reference to the fourth community card in Hold'em and Omaha.

A hand in which the player has two pairs of poker cards such as A-A-7-7.

A card dealt face up, visible to all players.

Our number one recommendation, based on personal experience and feedback from customers is Magic Holdem. 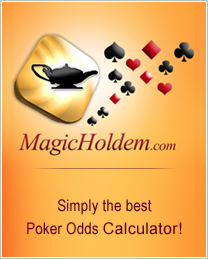 Look them up on the left...

Still confused by the Poker Language. Review the terms on the left and bluff like a pro!

August's Poker Girl of the Month

Come back next month for a new upcoming Poker star 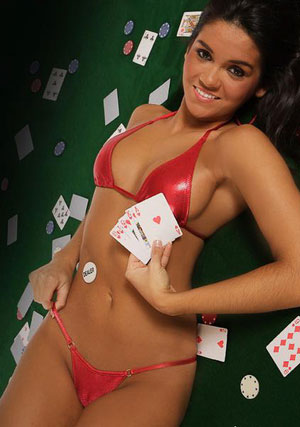